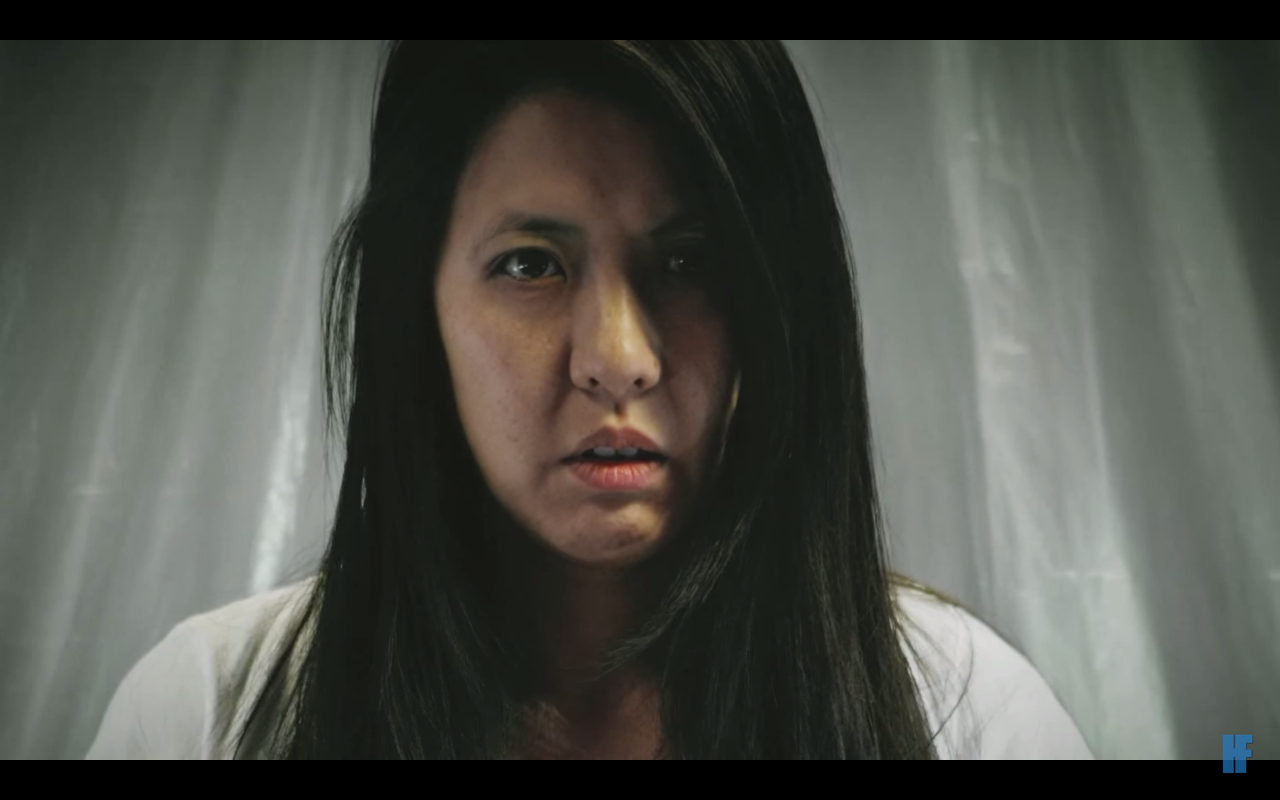 Comedy for stage, horror for screen; evil gnomes, fish tanks and everything in between.

Kiwese caught up with PJ-born actor, producer and ardent coriander opponent Hweiling Ow about her life as a creative in Auckland, to play or not to play the Asian roles, and what makes her tick.

NB: PJ is Petaling Jaya in Malaysia, not Peter Jackson.

Hweiling Ow’s resume reads like a menu at a funky nu-fusion restaurant, where you confidently nod away at the dishes you understand while being discreetly disorientated by others.

While some loyalists to the nation’s longest running soap drama Shortland Street may recognise Hweiling as the help-me-I’m-dying token Asian patient Angkasa, it is in independent stage and screen productions where her talents truly shine; gore flick T For Talk is only for the strong stomached and brave hearted, while her multiple roles in Under the Same Moon have had audiences cracking up and theatre reviewers singing her praises.

Like many creatives in the hardly bounteous funding environment of New Zealand, Hweiling’s credits are punctuated with advertising gigs and commercials. However, with so many new projects and concepts on the go right now, she should be able to close out of those Looking for Work tabs forever!! Or at least just bookmark them for later.

Without further ado, here is the interview with the hilarious and wonderful Hweiling Ow. Hweiling in a still from the short film M is for Musical Chairs. Nightmarish stuff.

KIWESE: What up Hweiling! Genuine question, how do you pronounce your surname?

HWEILING OW: Huwayling Ow!! Like if someone punches your arm and it hurts, or if you stub your toe, or if you walk into a wall. Anytime you are in pain, think of me.

As an actor/producer/creative, your work is far from a 9-5. Can you walk us through a day in the life of Hweiling?

No day is the same. Like every bacteria, plankton, and snowflake. But like every artist – I think about where my next pay cheque might come from, and how can I make this work. I am great at stretching my dollar and am a better cook too because of that… silver lining!

You discovered acting in your twenties. What were you planning to do as a career prior to that?

Unlike lots of people, I didn’t have a plan. Having a ‘career’ is overrated. Life is measured in many ways.

In a previous interview, you said that as an actor you need to bare all your insecurities. That sounds TERRIFYING. How do you approach that level of honesty with yourself while working?

I strip down and rehearse naked. Honour thy feelings to yourself – no matter how inappropriate society may judge it to be.

Can you share some of your life’s greatest cringe moments?

This time I was on a date, and I hadn’t realise how much my stomach doesn’t agree with fresh milk. The whole date was silently toxic.

Blue Cod in Bubblelands. Photo by Julie Zhu for Tearaway.

You just finished Bubblelands, where you played a Blue Cod in a fish tank. How did you and your co-star Benjamin Teh prepare for these fishy roles? Visits to Kelly Tarltons having deep and meaningful chats with the fish?

OMG – how did you know I speak fish?! The Blue Cod Society are really unimpressed with the extent the Gloriavale community has copied their culture without any public acknowledgement for where they get their inspiration from.

You’re currently producing and acting in the web series AFK. Is there a deeper gaming nerd within you that drew you to the series?

My deeper nerd is alive and well in my everyday life. I am a recent proud owner of a BB-8.

The players are all stuck in bodies that they created online, is the idea of separate inner and outer identities something that interests you?

The writer/director of AFK, Peter Haynes, should be the one credited for everything AFK encompasses because it’s his baby. Very very clever, and so much potential. I love everything sci-fi and fantasy. My character is kooky and slightly psychotic, so I’m loving it.

Amy plays alot of MMORPG with her boyfriend Jack. Turns out he’s a douche and cheated on her with her best friend. So when she was trapped in the game, she’s pretty pissed off and very skilled. She ate dead fairies to keep alive, and plotted her revenge. She wields a huge hammer, and plays a gnome in the game.

Woah epic. You are also doing some writing. Are you thinking of putting on your own show, or making your own film?

Short answer is yes for film. I have started to write something for theatre, but found it hard to get my head around. My background isn’t theatre – I’ve only been doing it for about four years and I am still learning the ways.

I am great at horror concepts. Exhibit A:

Dude, that is fucked up. Reminds me a lot of Saw/Hostel/gore movies my sister and I used to be obsessed with. What are your favourite horror flicks?

Hah – lots of people made that comparison. The IRONY is that I do not and cannot watch horror. I remember watching Blade and having to leave all the lights on in the house. I watched Brain Dead in two sittings. And just thinking of Poltergeist pushes my anxiety levels up. My brain is warped enough and the dark still freaks me out.

The Internet is full of stupid black holes and click bait, a theme you and Peter played around with in your 48Hours entry this year, as well as the online world in AFK. I feel like the world is waiting for you guys to make a way-too-close-to-home internet based horror flick… Thoughts?

There’s plenty of real horror stories – we should just pitch for a reality TV series of that instead. Life is like the internet. There is great amazing stuff, and bad dark stuff. Choose what you click on – cos you never know how many pop-ups you might end up with.

What draws you to compete in 48Hours every year?

We’re not very sociable. So its becomes a bit of a marketing tool for our skills. We make good shit in two days. Also, we’re a sucker for punishment.

Woah. Polyglot alert! You speak five languages, four more than most other Kiwis. Can you tell us how you learnt all these languages?

Lol, okay, clarification: England my first language is. Then Malay, it was in all the schools, then Hokkien, the only language my grandma could communicate with me in (with the help of sign language), kinda like a 5 year old. Then Cantonese – cos all my classmates were speaking it, and now I’m learning Mandarin just cos there are so many peeps speaking it.

I want to pick up the basics of Tamil and Arabic at some point. Sounds impressive, but you get Cambodians, Vietnamese, Thai people coming to Malaysia, and THEY pick up the local languages and dialects to survive and find low level work for a better life.

How did you fall in with the Liang sistahz? You have worked with Renee and Roseanne for stage and screen.

True story, I met Roseanne in a casual random hip hop class in Auckland Central fifteen years ago, saw that she was into making movies, and I’m like HEY I LIKE MAKING MOVIES TOO!!!! Renee came much later when she was writing for theatre, they ARE STUPENDOUSLY AWESOME BEAUTIFUL PEOPLE.

My Wedding and Other Secrets:

I had two personalities in Two Fish ‘N’ A Scoop. I invited another seven more into my brain, like Being John Malkovich. Baptism by fire is how I roll. I people watch. 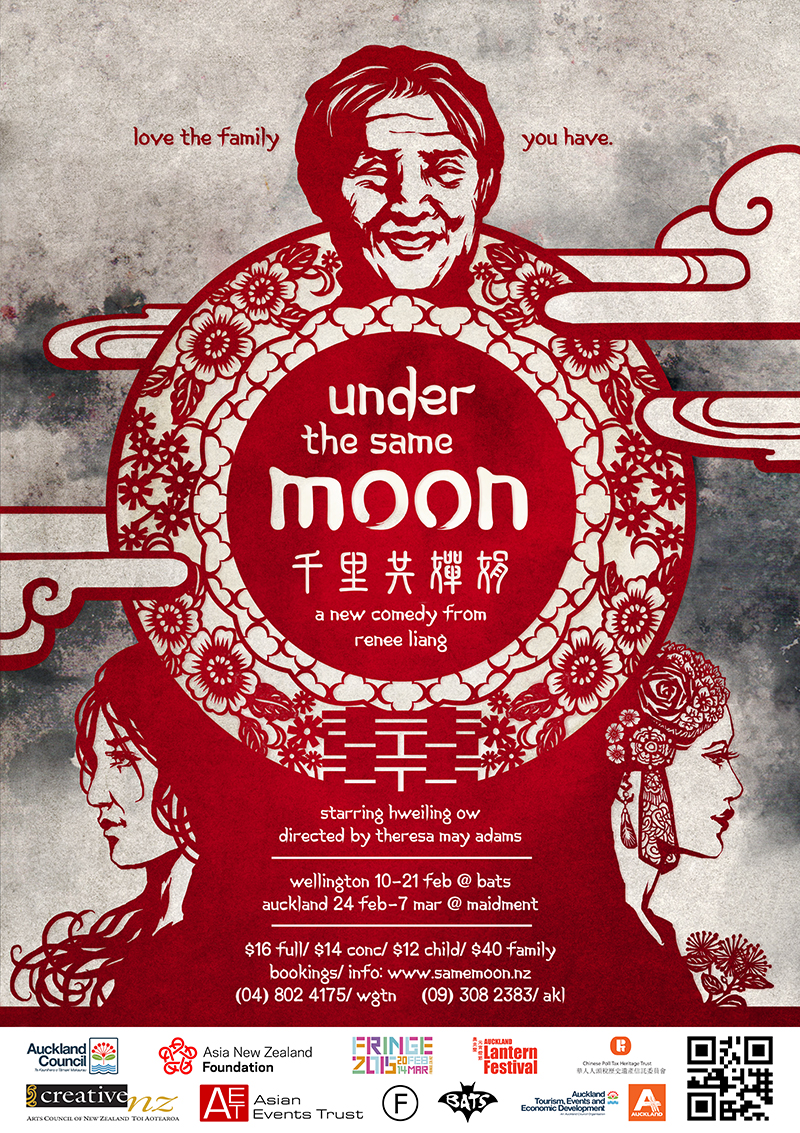 Allan Xia designed the poster for Renee Liang’s play Under the Same Moon, starring Hweiling Ow. You can read interviews with all three of them here on Kiwese. Yes.

“I have turned down roles if I didn’t think the accent was necessary, or if I was having one of those – ‘nope, not doing an accented character’ days.”

I know Renee is more interested in writing more ‘non-cultural’ pieces this year, but using Cantonese on stage and even just seeing the NZ Herald publish the words ‘Por Por’ is awesome in asserting Asian voices into NZ theatre.

What are your thoughts on playing roles where your Asian-ness is the focus, and how do you break away from that?

Non-cultural?! It’s got cultural. New Zealand needs that ‘transitional period’ of being offered stories of people from different cultures and races instead of default setting. It’s important these stories are more than just culture and race. As for Renee, I think her breaking point is Bubblelands, though I haven’t seen The Quiet Room. If having culture is relevant to the story, it needs to happen. Each person journeys through the transition of just writing humanistic stories – differently. I am happy to play those characters as long as it serves the story and the story is a good one to tell.

Have you ever had a showmance?

On screen and on stage – yes.

Have you ever corpsed on stage? If so, what was it that set you off?

Yes! My sister blister sitting in the front row giggling. She’s been away and it was the first show she’d seen me in. After that, we agreed she should sit as far back as possible.

Which character that you’ve played have you connected with the most?

That requires knowing myself really well. Which is still a work in progress.

What is your ideal post-show celebration/commiseration feed?

Sweet and salty popcorn and sushi. Apparently being Asian, I should be in love with food. But I’m not.

“I get accused of being Malaysian and not liking coriander. If you want to see me puke, just bring me a bouquet of fresh coriander.”

Hath you any words of wisdom for aspiring filmmakers/actors/creatives?

If the timeline of earth was compressed into one year, humans wouldn’t show up until December 31 at 11:58 p.m.
Complete this sentence: New Zealand needs more________?

Here, Hweiling shares with us her YouTube recommendations, so we can all spend more time in front of our screens.