The other day, while sunbathing on the lawn of a Melrose flat, my friend and I began thinking about the diminishing human element involved in post-internet music consumption.

When I was at high school, I basically lived at Slow Boat Records and Real Groovy – music havens where I’d browse for hours, listen to CD posts, purchase records, get recommendations from staff, find out about new releases from posters in the window, pick up gig guides and buy tickets to upcoming shows.

I remember getting up at dawn to bus into town and be amongst the first to hear Stadium Arcadium the day it was released in New Zealand. I remember staying overnight outside the ticket booth, flanked by fans draped in sleeping bags, eagerly waiting for sales to open for their first Auckland show. This was about ten years ago now.

Nowadays, you can be a fan without ever leaving your front door. With the exception of buying The All Seeing Hand’s Sand to Glass on vinyl at the door of their album release show, I bought all this year’s featured albums online, without even talking to a single person.

The internet means accessibility has grown but human contact has reduced. But the creation, sharing and consumption of music is still an immensely personal thing. These albums create the soundtrack to so many aspects of our lives, they speak to our own experiences or the experiences of others and make us feel things more deeply. Let’s continue to feel, express ourselves and connect with others.

I’m so thankful to all these artists for producing these works and sharing them into the world, where they can be shared and distributed in an instant across the globe.

In no particular order, here are Kiwese’s favourite releases from New Zealand and China in the Year of the Monkey 2016.

The All Seeing Hand // Sand to Glass

The All Seeing Hand finally gave birth to Sand to Glass in December and oh yesyesyes, it has been worth the wait.

It is perhaps their most ‘pop’ record to date, if The All Seeing Hand could ever be considered so, with tracks like Lizard Brain and Swarm standing out as previously released singles and indicating a shift away from the more abstract compositions of Mechatronics (2013) and Fog and Debris (2014) and towards a tighter sense of songwriting.

Listened to this on repeat while biking through the smog of Chengdu, the soundtrack to this environmental apocalypse.

(Be Sure)
Beijing, CN

My friend Liu Xing introduced me to Xu Huai Ruo Gu earlier this year and I was immediately hooked. Released digitally on the Berlin/Shanghai techno label Be Sure, which is home to brilliant offerings of mixtapes from artists such as Art’s Difficult (ELVIS.T) and Shanghai techno queen MIIIA.

Formerly known as NiChiFanLeMei, this Mt. Emei born Beijing-based producer creates a kind of brutalist, no nonsense techno – all muscle, no fat.

Possibly my most listened album of the year, suitable for furiously bike riding to a destination or scrubbing the kitchen and getting that shit clean as hell.

Orchestra of Spheres // Brothers and Sisters of the Black Lagoon 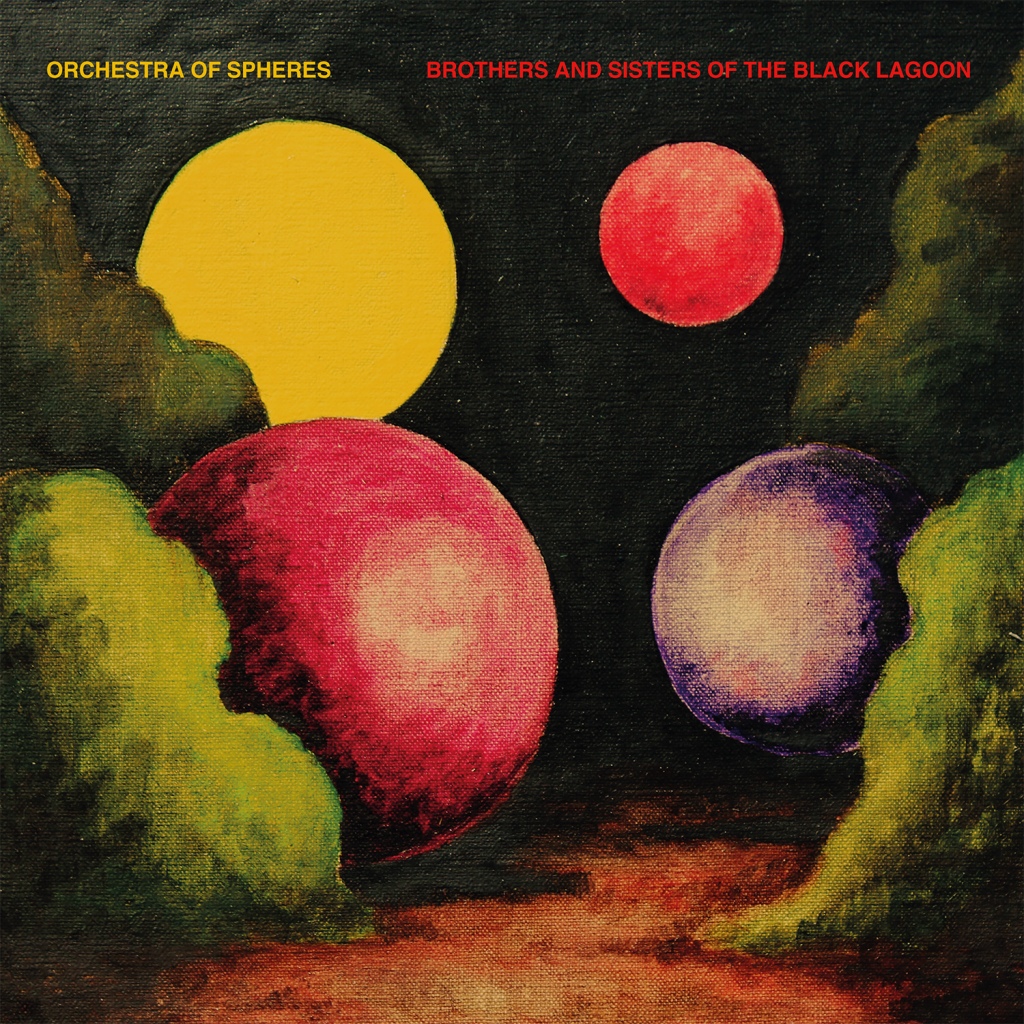 Brothers and Sisters of the Black Lagoon is a psychedelic serving of tunes, many which have been part of the Spheres mind-melting live set for the past few years.

Their knack for combining the everyday with the otherworldly is evident throughout the album: Let Us Not Forget, an eerie prayer of reminders before leaving the house, the intensely danceable South East Asian inspired jam Anklung Song and their fast-paced Zombie Zombie cover Rocket #9.

Bubbling with sounds both organic and electronic, voices both chanted and spoken, influences both local and extraterrestrial, Brothers and Sisters of the Black Lagoon is a tasty, special brew from my favourite band of Wellington weirdos.

Duck Fight Goose have teamed up with producer Lv for this smashing record on D-Force, their first release in four years, the soundtrack to interplanetary cyborg dancefloors.

CLVB ZVKVNFT is bursting with imagination and inspiration, combining elements of breakbeat, acid house, synth pop and techno into a cohesive string of 12-tracks. Busy yet uncluttered, frantic yet disciplined. A triumph.

Patriotic Grooves is a fast and furious fuck you from Wellington punk trio Unsanitary Napkin, formed in 2015 and fronted by guitarist/vocalist Hannah Salmon a.k.a. artist Daily Secretion, who is well known for her zines, gig posters and album art in collaboration with other Wellington-based bands.

The 12-tracks of the album are punctuated with broadcast radio beeps and sound grabs from white, male New Zealand politicians and media identities. Incredible, machine-gun-like drumming from Ben, who forms a blistering rhythm section with Rupert on bass.

As the album’s defining image of Donald Trump being annihilated by a rainbow beam from a winged vagina (the sticker version shaped like a sanitary pad) would suggest, Patriotic Grooves is comprised of vaginal blasts of anarcho feminist anger directed towards the chauvinistic and conservative peaks of society.

Keep an eye on his electronic label Prajnasonic and stay tuned for next year, when the bass will drop.

“I’m too busy drinking / all of the time”

In September, I found myself sitting in the bath tub of a five star hotel in Auckland, up to my tits in hot water and drowning in anxiety. Like my mind was smashing itself into the ground, stuck in a violent wash cycle of negativity, trapped underwater in a swimming pool covered by an immovable tarpaulin. I felt like I was going to rip my own face off.

Sin Cristales brought me back to earth, having articulated such emotions to great effect. Grateful. xx

Entrance & Exports is a remix of Yue Xuan’s beautiful piano album In & Out from 2015. Bringing together producers from around China such as MHP, Broken Thoughts, Hong Qile, iimmune and Cvalda onto one impeccably well-crafted compilation (which was initially available as a free download on Douban), the remixes span Minimalist, Post-Rock, Drum & Bass, Techno, Glitch, Drone, Hiphop, Experimental, Ambient and IDM, bringing a whole new electronic take on the original.

Entrance & Exports and accompanying national Remix Tour is a fine example of how this young composer is utilising the resources and connections around her to produce something new and exciting.

Mermaidens have come a long way since those first acoustic demos four or five years ago, with Undergrowth released in March establishing them as a staple of the Wellington indie scene.

Enchanting mermaids conjuring “dark witch rock” from the dense scrubland is as psychedelic as it sounds – lurking with hidden dangers, the title-track Undergrowth gradually flows from a slow and dreamy creek into a thrashing, rocky river, a structure many of the songs take on the album. There’s certainly something of the occult about these mermaids, whose reverb drenched vocals often take form in first or second person: “I’m a corpse on the beach / I’m a thing / send me out to sea,” pulling the listener deeper into their imagined natural world.

The undergrowth is a mysterious place barbed with the grit and sharpness of gorse, as well as the strength and unruliness of deep roots. Look forward to new material in 2017.

Favourite track: Under the Mountain II

There’s something in the water up in Dalian…

I hadn’t even heard of the Dalian Obscure Club until copies of Northern Electric Shadow turned up on CD and vinyl at NU SPACE.

The power of crashing waves, the fluidity of rising tides, the delicacy of swirling rockpools – this is understated, beautiful ocean-inspired math-rock. A fresh breeze of sea air!

Males // None the Wiser

A burst of sunny South Island power-pop. The long-anticipated follow up to their debut MalesMalesMales in 2012, None the Wiser is full of so many bright, catchy riffs and uplifting falsetto parts that wearing sunglasses should be listed as a prerequisite for listening. A set of wonderfully crafted guitar songs.

The Fuzz // The Root of Innocence
法兹乐队《童心之源》

This upbeat, chorus-soaked indie rock record is possibly the most Maybe Mars-y Maybe Mars release to date – you just know Yang Haisong has been here.

The audience were quietly bopping along when The Fuzz came to Chengdu on their enormous album release tour in early 2016. Then when Sijiang from Hiperson came out to help them sing《控制》, the crowd exploded with cheers and turned into a sea of moshing bodies, it was beautiful.

Peaches and cream are my favourite kind of lollies. So perhaps it is inevitable that I would be into this new young Auckland producer, who dropped her first EP earlier this year. Peach Milk’s music sounds like her name would suggest – sweet and smooth.

Look forward to her sound evolving in the new year.

Six-tracks of candy-coated indie-pop from our Cantonese speaking friends yourboyfriendsucks! Opening with a tribute to Just Like Honey by the Jesus and Mary Chain, how can I not love this? Surprisingly clean production for QiiiSnacks Records (formerly Full Label), known for their DIY lo-fi recordings.

Perhaps the biggest travesty of 2016 is the dissolution of ybfs!, as the lead singer Zoey has moved to Europe to study. Episode 1 is in fact the final episode. Boo!

Favourite track: Stay or Stay Away

Perhaps I’ve included Higher Brothers Mixtape here more for their impact rather than my own personal taste, but their skyrocket to fame and influence on the local scene this year is certainly noteworthy. If Fat Shady put Chengdu hip-hop on the map, Higher Brothers CDC rappers Masiwei (马思唯), Dz, Psy.P and Melo, have dabbed themselves to the top and become one of Chengdu’s, if not China’s most iconic hip-hop acts.

This 19-track offering is a searing blast of arrogance and attitude delivered in a mix of lightening fast Chengduhua and American slang. Whether or not elongated trap beats are your thing, or that each track repeats the chorus about five times, tracks like 《野猪儿》 and 《尴尬》 have attained anthem-like status and established hip-hop as the biggest sound in Chengdu.

Now managed by Asian hip-hop agency 88 Rising, Higher Brothers have taken Chengdu hip-hop to an international level of “worldwide shit.” As collaborations with international artists such as Harikiri, Charlie Heat, Bohan Phoenix and J.Mag roll in, I look forward to their sound maturing more in future.

Next year we can look forward to…