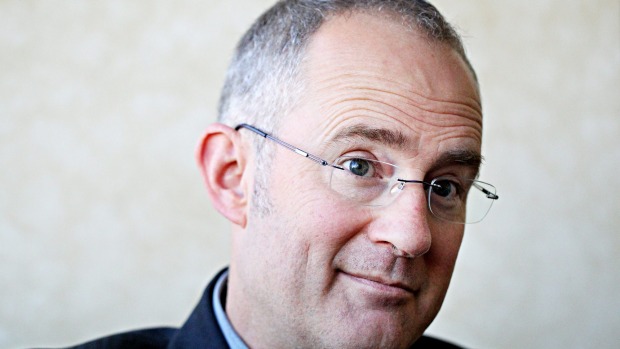 New Zealand’s social media is aflame with hot and sour responses (from people with Chinese sounding names and non-Chinese sounding names) to comments from Labour’s housing spokesman Phil Twyford on TV3’s The Nation in an interview with Lisa Owen on Saturday evening, where he accused foreign investors, specifically those with Chinese names, for depriving Kiwis of their house buying dreams.

Read the transcript of the interview here. 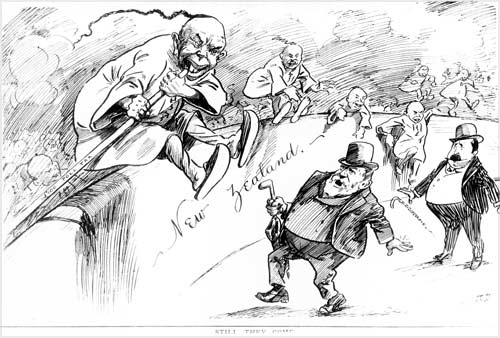 Kiwese doesn’t often weigh into politics, but I’ve been following the responses to Phil Twyford’s statements over the weekend from hard-edged Kiwi commentators such as Tze Ming Mok and Keith Ng and have found it hard to restrain my own frustration.

On Saturday 11 July, Phil Twyford appeared on both The Nation and in the NZ Herald armed with Labour’s latest “analysis” of the housing market in Auckland. Over the weekend, actual analysts have taken him down here, here and here, while Race Relations Commissioner Dame Susan Devoy says Chinese in New Zealand “deserve better than to be singled out” based on their surnames.

So what are the numbers? Labour are running their combo fried rice set of data which consists of ‘leaked’ figures from an unnamed real estate agency in Auckland, as weighed up against the city’s 9% resident Chinese population. As all people with Chinese surnames know: combination fried rice consists of random leftovers and shit in the fridge.

Now, despite what my Chinese name may suggest, I am god awful at maths. Thankfully, Keith Ng, statistician, journalist and Chinese sounding name person, has examined the figures in absolute terms over on Public Address. He writes: “You can’t magically MATH your way from a last name to a residency status.”

The real estate data from the myopic period of three months between February and April 2015, shows that 39.5% of houses were purchased by people with “Chinese sounding names,” while the electoral roll shows that Auckland is only 9% ethnic Chinese, leaving a discrepancy of 30%, as emphasised by big chunky infographics and a scrolling list of Asiany surnames full of X’s and Z’s. According to Twyford, this discrepancy points to a “tsunami” of foreign Chinese investors who are flooding the Auckland property market, taking with them the water-logged debris of the dream verandah from the grasps of young, hardworking Kiwi home buyers.

If this is supposed to be about restrictions on foreign buyers, why bring ethnicity into it at all? Not only has Twyford brought out the race card, he has specifically targeted one ethnic group. The Chinese. We look distinct, our names sound distinct and the groundwork has already been laid through decades of having a crap image in the media… hidden camera exposés on dirty Chinese kitchens, dramatic confiscation of contraband products in airport security shows, the all-tarring brush of news headlines about dodgy Asian drivers, high-profile murderers and now, greedy offshore investors. 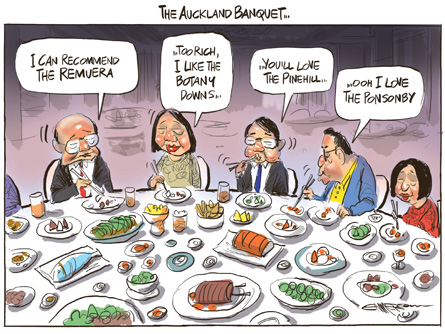 It appears that for Labour, singling out ethnic Chinese for looking Chinese is a bit too old-fashioned, so the change of tack is to judge whether we sound Chinese. Perhaps Labour should have door-knocked these properties after all and sniffed around for any scent of soy sauce, illegal fireworks and/or opium.

For the sake of analytical accuracy in his interview with a somewhat stunned Lisa Owen, Twyford discussed the probability of Lee being a Chinese name or a non-Chinese name, the house buyer could be a Brett Lee or a Bruce Lee! To dredge up the old Winstonism, we could be talking about a white one, or a Wong one. He goes on however, if your surname is Wang, there’s a 95% chance of being Chinese. But what am I harping on about, let’s just “forget racism.”

Phil Twyford rips his face off to reveal it's in fact Winston Peters.

Upon removal of one’s yellow tinted glasses, Labour’s figures boil down to little more than an unsubstantiated set of figures that blame the Chinese for Auckland’s housing crisis based on a game of Charades, with Twyford heavy on the clue for “souuuuunds liiiiike…“

Twyford corroborates Labour’s surname guessing game by stating there’s a “major presence of people of Chinese descent in the Auckland real estate market, but the Government has been in complete denial about this.” Newsflash, guys, there are Chinese people in Auckland looking at houses… and the GOVERNMENT IS DOING NOTHING ABOUT IT. I swear dragging us along to open homes “just for a look” was Dad’s favourite hobby when we were kids, alongside bulk-buying discount toilet paper at Pak N Save and discussing the price of bok choy with Uncle Wong. As London-based “shouty Asian girl on Public Address,” Tze Ming Mok writes, “for Chinese immigrants in the West, buying houses is almost on a par culturally with food. It’s like you’re giving us shit for eating.”

Chinese people (me) are coming for your houses
👲🏡👲🏠👲 pic.twitter.com/9Lewl13uA5

After watching The Nation interview, it was clear to me that Twyford has played to the assumption that those with “Chinese sounding names” are foreigners to New Zealand, furthermore, they are the ones who are “driving up house prices beyond the reach of hard-working Kiwi first home buyers.” It is just plain offensive. The us and them attitude smacks of fresh, 2015 Yellow Peril rhetoric for people to deploy alongside the opener “I’m not being racist, but…”

Today Twyford wrote for the Herald to support his statement from Saturday night. He and his frighteningly large support base of Stuff and Herald commenters (if there were ever a time to say never read the comments, it is now) can deny this being about race, accuse offended Chinese commentators of being too PC, and even have the temerity to ask us to just “forget racism” in order to have a “mature public debate,” but when a party bases their foreign housing market analysis squarely upon whether a name sounds Chinese or not, well, that is just straight-up racial profiling.

There have been emotive responses to Twyford’s comments from all sides of politics. Any issue that scapegoats a particular ethnic group will provoke emotion. It is offensive. I am offended. And I’m worried about how the continuously negative, invasive portrayal of ethnic Chinese in the media by the highest levels of government will fall back on the way we are treated on the street, at an open home, online, or at school. I hope we are past ching-chong Chinaman. I hope I never have to hear “go back to where you came from!” ever again.

When @nzlabour blames offshore Chinese for NZ's housing problem, it's Chinese New Zealanders who are harassed and treated with suspicion.

Labour’s analysis rests on the presumption that people with Chinese names are simply non-resident foreign property speculators, and perhaps the most upsetting part of it all is the underlying narrative that New Zealand, and by extension New Zealanders, are not Chinese. It reinforces and relies upon the toxic monocultural hegemony that to be Kiwi, a real Kiwi, is to be white.

Just last week marked the 134th anniversary of the New Zealand Government’s Poll Tax on Chinese immigrants, many Kiwi Chinese families were affected by this shameful and unjust tax, but just how many Kiwi kids are taught about this part of our national history?

There is a deeper cultural refusal to allow Chinese stories to permeate mainstream cultural consciousness in New Zealand, a denial to our rightful stake in the building of this nation. It doesn’t fit alongside the long white cloud of British settler history in New Zealand. A closer examination of the colonisation of Aotearoa would bring out too many colonial skeletons. 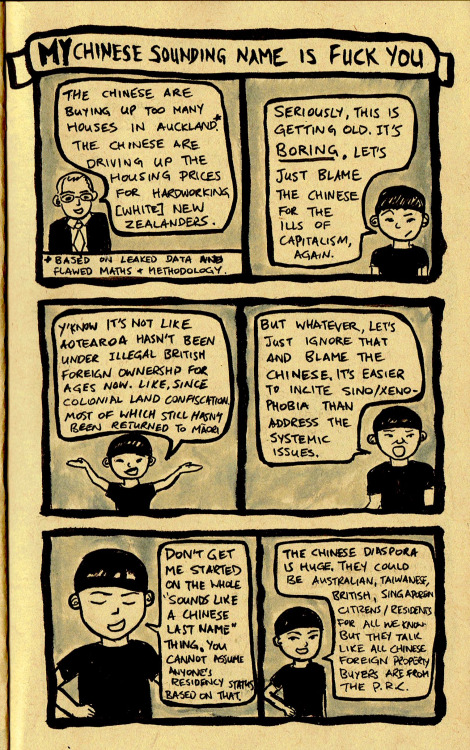 My Chinese Sounding Name is Fuck You, via 没人在 everythingisnothingbyitself.tumblr.com

From the market gardens, the restaurants, the shitty ass jobs that no one else wanted to do… Chinese people have been contributing to New Zealand society since the mid-late 19th century. Chinese ingenuity and experience with farming and irrigation saw all sorts of fruits and vegetables spring up where they’d never been sown before. My family on both sides had started, developed and sold several businesses (back-breaking laundries and restaurants etc) before Twyford’s Irish immigrant parents even arrived in the 1960s. Who’s the foreigner here, again? Is it just me or is there SUM TING I’m missing here?

Now that Mr. Twyford has divided the housing crisis into two sides: 1) those with Chinese sounding names and 2) deprived, hardworking Kiwi families, I can finally understand what Mai Chen meant at the Bananas Conference about us Chinese needing to combat discrimination and redefine for ourselves what it is to be a Chinese New Zealander. We need to speak out. We need to tell our stories. We need to stake our claim. 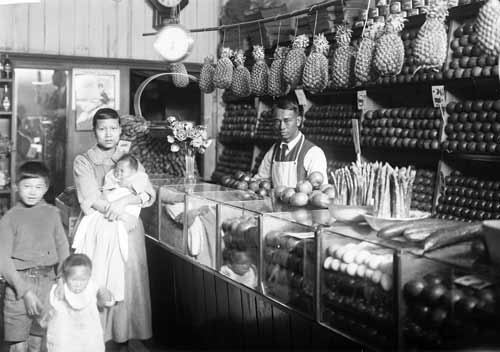 The Chinese have been in New Zealand for a really long time now. Mr. Twyford and supporters, please, enjoy our fruit and vegetables, come dine at our Yum Chas, even utilise the hashtag #ilovedumplings or some shit to demonstrate the diversity of your palette for Asian cuisine, but do not then have the audacity to scapegoat us for Auckland’s problems, then turn around and say it’s about foreigners.

A final question for Phil:

If this isn’t an issue about race…

then why the bloody hell did you make it one?!

[You’ve pissed off a lot of angry online Asians. Good one. Nice job.]

Leave a Reply to Started from the Bottom Now We’re Here: 14 Years Since the Poll Tax Apology | KIWESE Cancel reply