While the Chinese Government plaster the streets with images of the ‘Chinese Dream’ 中国梦, there are quite different dreams being conjured in the belly of the Chengdu underground.

Zaomengshe.com 造梦社 is crowd funding website that provides a platform for the local creative community. Co-founder and Marmite enthusiast Lydia McAulay came over for a cuppa to talk about the website’s one year anniversary.

The music scene in Chengdu is probably the main reason I wanted to move here (uh, I mean, the opportunity for increased trade ties with New Zealand…) Last summer, after being shown a street party blaring from a kitted out supermarket trolley on a foot bridge, followed by a drum and bass rave at a swimming pool with fireworks, I knew Chengdu was something different.

Around the same time last year, co-founders Lydia and Mat were working through the long-winded bào àn 保案 registration process for Zaomengshe, which has since helped fund over 100 local campaigns and raised over ¥117,000.

As the small, dedicated team, including two developers referred to as ‘the app guys,’ suss out PayPal payment gateways and release the ZMS Ticket Scanner App, allowing for pre-sale tickets QR codes to be scanned by several devices at once, the opportunities for the website abound and the dream factory at Zaomengshe are showing no sight of slowing down.

Diligently hunched over a Macbook while wrangling several iPhones and multi-lingual phone calls is the usual state in which one will find Lydia. Zaomengshe is the labour of love (from which she earns a whopping total of 0.00 RMB) that she hopes will bolster the independent music and arts scene in the face of meaningless vast corporate sponsorship, which has been jumping on the growing music festival bandwagon in China and steering it down a bleak road of profit and commercialisation. 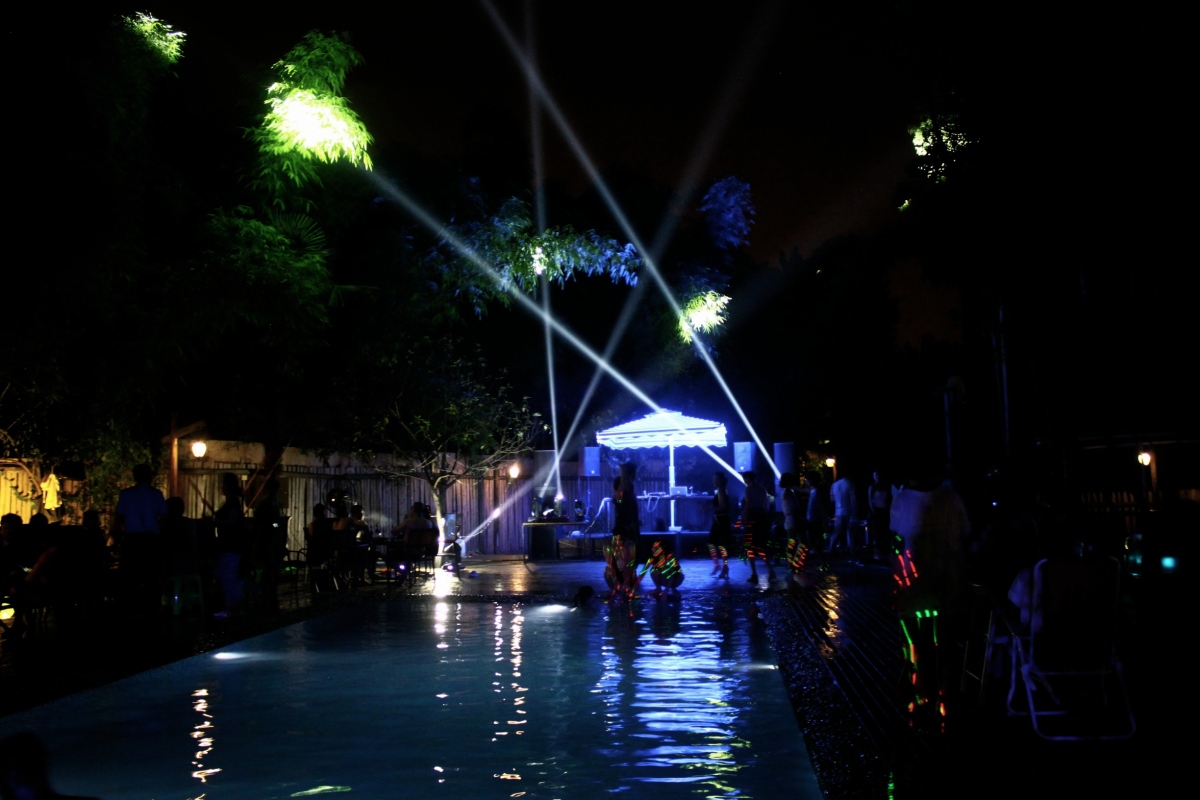 KIWESE:  Hey Lydia, how did you first end up coming to Chengdu?

LYDIA: I’ve been here for about five years – but it must be coming up on six years now. I left New Zealand in 2005 and was living in Normandy and Ardeche in France for a bit over a year. I ended up moving to Guangzhou for a year, where I learnt a bit of Chinese from my flatmate. I lived in Scotland for a year and bit, then London – where I got a job in the IT department of a derivatives trading company, which sent me to Chengdu. They were really open minded and put a lot of trust in me. I learnt a lot working with them.

Did you have any prior IT experience?

No, I studied Politics and Art History at Vic [laughs].

So you are originally from Tauranga and lived in Wellington for a while. What generation Kiwi are you?

My mum is from outside Opotiki. She’s like fourth generation Kiwi. My grandfather’s grandfather was born in New Zealand. They came from Midlands England, and they were the typical settlers trying to find a better life: ‘farmland coming out your ears!’

My dad is from Scotland and lived at sea for like twenty years on cargo ships. He was in the Merchant Navy as the first engineer, second below the captain. He told me stories about going through the Suez Canal back in the day. They went up the river into Guangzhou quite a few times. There were walls along the river, he said their boat was slightly higher than the walls, so they could see farmlands and heard speakers blaring out Mao’s thoughts.

Coming to Chengdu, how did you see there was a need for a platform like Zaomengshe?

It was a long story. I left China for a year in 2012 – that’s when I met you in New Zealand – and one of my friends was living with Anna, who started PledgeMe. So I ended up having a good chat with her about crowd funding, and was thought “holy shit, this would actually be a brilliant idea in China,” because there are some real problems with artists getting funding here. The bottom line for artists is different to that of young people making music in New Zealand.

You mean creative arts funding sources like NZ On Air and that?

A lot of what happens here is traded in guānxi, 关系, relationships, so if you don’t have the right background, you are really hard pressed to get your ideas heard. Crowd funding is a way to break down those traditional barriers. I guess it’s the anonymity of the internet – on the site, people have a username to post their campaigns, you are just a person with an idea, so people will look at your idea – not who your rich daddy is.

What were your first impressions of the music scene back in ’09?

One of my first friends here was Li Lan, the owner of Lan Town 蓝堂, which was – and still is – the hub for folk music here.

First gig I remember going to was Zhang Xiaobing 张小饼 . He is really interesting guy, who used to be a liúlàng 流浪, how do you even translate that? Like a roaming musician. His lyrics are really poetic and he incorporates his local dialect, instruments and way of singing into his songs. He is also a shǎoshù mínzú 少数民族, it’s quite cool how he manages to bring these ethnic minority aspects into his music.

When you say shǎoshù mínzú 少数民族, ethnic minority, do you sometimes feel like a minority in China?

Yeah in someways. I guess it can be a little bit difficult here – being white. Because you feel like you will never be totally accepted, ya know what I mean? Peoples first reaction to you is that you are foreign. Whereas when I lived in France, you could almost mix in, especially in the small town I lived in. People wouldn’t realize right away that I was foreign, which was kinda cool. You feel like if you did actually stay there for a really long time, you wouldn’t feel like a foreigner your entire life.

“The thing is – people treat you like an outsider until they know you. It’s the same in any country. Once you get to know them, you stop thinking of them as ‘that person who is different.’”

What are the main platforms that people can use to share their campaigns on Zaomengshe?

People are much more used to doing things on their phones here. Weibo 微博, WeChat 微信, and we have QR codes. I talked to Xiao Xue 小雪 (The Hormones) about crowd funding an oven – she’s thinking of having an event where people come along and scan their QR codes to get a cake!

From an IT working perspective, what was internet censorship like in China when you first got here?

Is that day like a ‘where were you when Michael Jackson died’ kind of memory?

I think it was about May or the start of June 2009. I remember that day because my workmate who sat behind me was receiving distressing calls from Xinjiang, where he comes from, there were massive riots. They didn’t just block Facebook, Twitter and YouTube, they put the internet for the entire province on lockdown. My poor workmate – it was a really emotional time. We were all worried about what was going on out there.

Though I wouldn’t say that censorship has ever impacted our website. It doesn’t really affect people on a daily basis here. Well arguably the bào àn 备案 is censorship, but it’s just red tape. There’s a lot of red tape in anything you do here. But censorship is certainly not something that contributes to the story of Zaomengshe.

Dayi and Lydia modelling the new Hormones t-shirts, which you can buy on their Zaomengshe campaign!

What are your hopes for Zaomengshe, coming up to your 1st birthday?

At the moment, a lot of what we do is working with bars who want to use our ticketing platform – and it’s great that we can support them in that way. But it would be really cool to have more crowd funding based events going up.

It’s difficult, there is a different mentality towards crowd funding here. A lot of people think it is like tuán gòu 团购 －this concept where, for example, if you want to buy a cheaper hot pot meal, everyone goes in on it and you can all get it for a better price. It’s not entirely false that that is not crowd funding – it’s almost an offshoot, but what we are trying to do is get people to change their ideas about what it means to be supporting music and the arts here. It’s about supporting, not buying.

I guess in NZ if you wanna support a local act, you could go to their gigs, buy their album on Bandcamp, buy their merch or whatever. Perhaps here in China, people are not so accustomed to paying for music online, so that cuts off a big part of supporting independent bands.

I think it’s the same in a lot of countries, the music industry struggles with free downloads being a pretty common thing. It’s not just China. It’s really common to use streaming services like Xiami for free.

Check out Lydia’s recent Pecha Kucha presentation in Mandarin about Zaomengshe, as part of a Creative Minds session in Min Town 明堂:

“The scene exists here without our website. We are just trying to do something that contributes to it, rather than to push it in any direction.”

What has been your favourite campaign Zaomengshe so far?

Probably Beat Chengdu, the New Year’s party last year that crashed our server. The guys at Zao Shang Hao 早上好 who put it on thought it wouldn’t sell over 150 tickets. It ended up selling over 600 pre-sales on the website, with about 2,000 people attending on the night. It was an awesome – it showed them there was a demand for that kind of festival, while also showing Mat and I what Zaomengshe was capable of.

Any local favourites in Chengdu at the moment?

I don’t really have a favourite. I just like the fact that people are being creative, it’s the key to things changing here. I feel like I’m just observing.

…But in saying that, I do really like Qi Qi’s music, Cvalda!

Oh, how’s your Marmite supply at the moment?

Onto the second jar. Bit worrying.

Eek. What are your other main hankerings?

So you are planning to suss out a boat and sail the seas, how’s that shaping up?

It’ll take a bit of planning. Technically, I looked this up, you don’t have to have an international boating license to skipper a vessel that’s under a certain size – and the size is enormous. You’d be surprised!

Count me in! Cheers, Lydia!