It’s that time of the month! Local Chengdu indie-rock band the Hormones 荷尔蒙小姐乐队 will kick off their first ever national tour tonight at Little Bar 小酒馆.

Bassist and lyricist Ming Ming 明明 invited me over for dinner to talk about vengeful elephants in Yunnan, menstrual cycles on tour and the new EP.

The Hormones 荷尔蒙小姐乐队, are a five-piece indie-rock band from the land of abundant greenery Chengdu, the capital of Sichuan.

Keyboardist Xiao Lijing 小李静 and guitarist (plus amazing cheesecake-baker) Xiao Xue 小雪 first had dreams to start a band as kids at primary school. The conglomeration of Juan Juan 娟娟 on drums, Ming Ming 明明 on bass and finally Zhu Meng Die 朱梦蝶 as lead vocalist, the Hormones entered the bloodstream of the local Chengdu music scene in 2011.

The band are about to embark on a fifteen date tour of China to promote the release of their debut EP ‘Elephant’ 《象》 starting tonight at Little Bar, Chengdu and concluding down at VOX, Wuhan on 11 November. You can check them out on Douban.

KIWESE: Hey Ming Ming! How did the Hormones start out?

MING MING: We formed back in 2011. People in China hear a lot of Chinese pop music growing up, ya know? So when we first started the band, we did Chinese pop music, but it had absolutely no meaning whatsoever.

The singer we had before worked at a serious bank job and had no way of continuing in the band. So we searched for a new lead singer and found Zhu Meng Die! When we heard her sing and play acoustic guitar, she did Rolling in the Deep by Adele and changed it from 4/4 to 3/3. We could tell she had a unique feeling, and all completely agreed on her. She just gets it – she understands the music and has a feeling for it.

How do you compose songs as a band?

I write all of our lyrics. So often it’s the lyrics first, then we will create the music around them. The keyboard could run a loop, then the bass and drums, guitar, and vocals will join in.

How do you write the lyrics?

The ideas just come from everyday life. For example, you are having to stand on the bus and there are no seats, you can imagine the bus is like a skateboard! Chinese society can be kind of depressing sometimes, you know? People eating smelly food on the bus or whatever, it’s kind of dirty and gross – but if you keep thinking about how uncomfortable it is then it will be worse. So you may as well make it interesting for yourself!

When did you first start getting into music and playing guitar?

Junior high school. I played guitar, then moved to Chengdu [from Leshan] to play guitar at Sichuan School of Music during high school. But I thought the exams were meaningless and I didn’t really like to play the stuff they gave me. I wanted to do my own thing. Like Tan Dun. He uses a violin to make erhu sounds. He uses water and paper. It’s very cool.

Some of your songs are written in English, tell me about that.

I think that within a song, English pronunciation is easier than Chinese. There can be strange melodies when you sing Chinese in a song. But eventually I want all our songs to be in Chinese. It’s not a pride thing, it’s that Chinese is our mother tongue – I feel I am in complete control of the language. So I don’t think our songs in English are written that well. Using your mother tongue gets you closer the the meaning you want to convey. I think Chinese is a lot more direct.

Why is the new EP called ‘Elephant’?

An elephant can remember everything, if you hurt him, he can remember your smell. 在中国，在云南只有一次，一个村庄 [in Yunnan, China, out in the countryside] people killed a little elephant.

Yes, bingo! Xishuangbanna. This baby elephant got lost in the countryside and walked into a village and trampled the maize and wheat crops, so the villagers beat it to death. After some time, a big group of elephants returned and destroyed the countryside.

The person who killed the baby elephant went to jail, but his wife still had his scent. So one day when his wife was out in the fields, a group of elephants came and trampled her to death. They could smell the man’s scent on her. She was with her sister at the time, but they only attacked the wife, not the sister.

REALLY. I’m still not finished. After that, 在墓地 [at the cemetery], the elephants came and trampled over where she was buried.

Wow. Why does ‘Elephant’ only have three songs, seems a bit short?

I want to do a surprise when our tour ends, I will put all the songs on the internet. It’s actually six, like on the CD.

What expectations do you have of the tour?

When I write lyrics, I hope they will resonate with people. Like when I watch Foals live videos, I am so moved – they make me want to pursue my dreams and never give up. I want [our music] to touch people in the same way, and to have them remember this feeling. I think this is more important than people knowing who you are. I don’t care if people like us or not, if I cared, we’d just play pop music.

我期盼能够。。。因为我写很多歌词，我期盼很多人能够有共鸣。 For example when I see Foals live, 我就会觉得我被感染了，我想我应该有一个梦想，我应该去这样做，我不应该放弃。我要让别人被打动。I think this is more important than people knowing who you are. 他可能记住了这种感觉。我不在乎别人喜不喜欢。如果我在乎别人喜欢的话我就做pop music。

Tell me about the Hormones’ new songs.

One of our new songs is called ‘Red Teardrops.’ You are a red tear drop, turning young hearts red. I think this song is interesting, every person is a red tear drop.

What do you mean by ‘red tear drop’?

At the School of Music, there was a teacher who accused a cleaner of stealing 1000RMB. The cleaner denied it, but obviously the college sided with the teacher. The cleaner was in a helpless position, cleaning toilets for a living, and had no way of paying the money back. So she jumped from a building. When someone accuses you of doing something you did not do and you have no way out. All you want to do is cry. This is red tear drops.

Any cities you are particularly looking forward to?

I’ve heard VOX Livehouse in Wuhan is very good. I’ve been friends with Liangyi, the singer from Stolen 秘密心动,  since we were classmates in high school. He told me the sound techs at VOX are very quick and professional.

What is the connection with New Noise?

Jeff from New Noise has helped us a lot with contacting livehouses, he sent me the information and let me contact them. 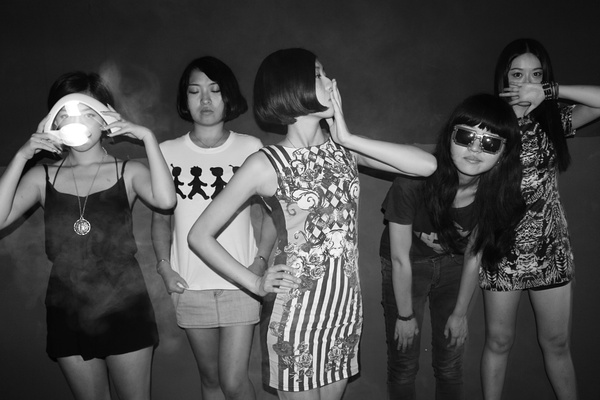 How do you feel you are received as an all-girl band?

A lot of stuff comes up. Like a lot of venues have booked girl bands as the warm up act just because they are girls. It’s really strange. Why have they got a heavy metal band opening for us? It’s like when Lydia (Zaomengshe) was working at that company. She’s a foreign woman. Then they sat her with another department because they are all foreigners. WHY??

Some people are stupid but you don’t have to talk to them. Someone on Weibo said “show us your underwear!” It is very stupid.

But an all guys band could go on tour and not have to worry about five girls having their period [laughs].

Who are some of your favourite bands at the moment?

You can buy tickets and merchandise on Zaomengshe! Support independent music!

The latest episode of the Sound Stage features the Hormones!