I have been agonizing over whether or not to write about Shen Yun. Now, a month on, here is the result of said agony.

I attended the second of two shows back in April at the St James with my friend Rosa, out of strong curiosity and desire for $60 worth of entertainment. The posters that had been widely distributed around Wellington (many of which are still pinned up in shops and restaurants), show a pretty Chinese girl in an acrobatic pose against a bright blue backdrop, with promises of a dazzling evening of authentic Chinese entertainment. The show has come to Wellington before and I have always wanted to go, but due to a student budget that had me eating microwaved potatoes with butter for dinner twice a week, I had never been able to afford the ticket.

For weeks after witnessing the spectacle and having people be like “oh yeah, I saw the poster for that,” I found all my conversations descending into wild hand gestures, full orchestral sound effects, interpretive dance imitations and sentences that would dramatically end with “…on a GIANT GONG.”

It was not until I read the fine print of the pamphlet that I realised the event was sponsored by Falun Dafa, a religious group that has a dedicated following around the world for its breathing exercises and values of Truthfulness, Compassion and Forbearance.

Oh, and it is banned in China.

Falun Dafa used to have a stronger public presence in Wellington, with followers often seen practicing on Cuba Street, unflinching from their meditative states even when the most abrasive, amplified buskers of Wellington began to howl. According to Fairfax, the Wellington City Council has banned Falun Dafa from participating in the Santa Parade and Chinese New Year Festival in recent years, while politicians and Councillors remain discreetly absent from any Shen Yun performances, despite their annual invitation.

There are no write-ups of the performance from publications that tend to review such ‘cultural’ events. There are no media passes. The only official reviews are ones from the  Epoch Times, the media arm of Falun Dafa, which tend to extract audience comments in a very particular way. There are also videos filmed by the group during performance intervals (all radiantly positive). See video below. Quote: “They excreted such elegance.”

I tried really hard to write a review based on the aesthetic qualities of the performance. Really. To what extent can we view a performance purely on aesthetics? At what point can you divorce the visual, aural “stunningly beautiful” stage performance from the political, ideological message that is so deeply instilled within it? 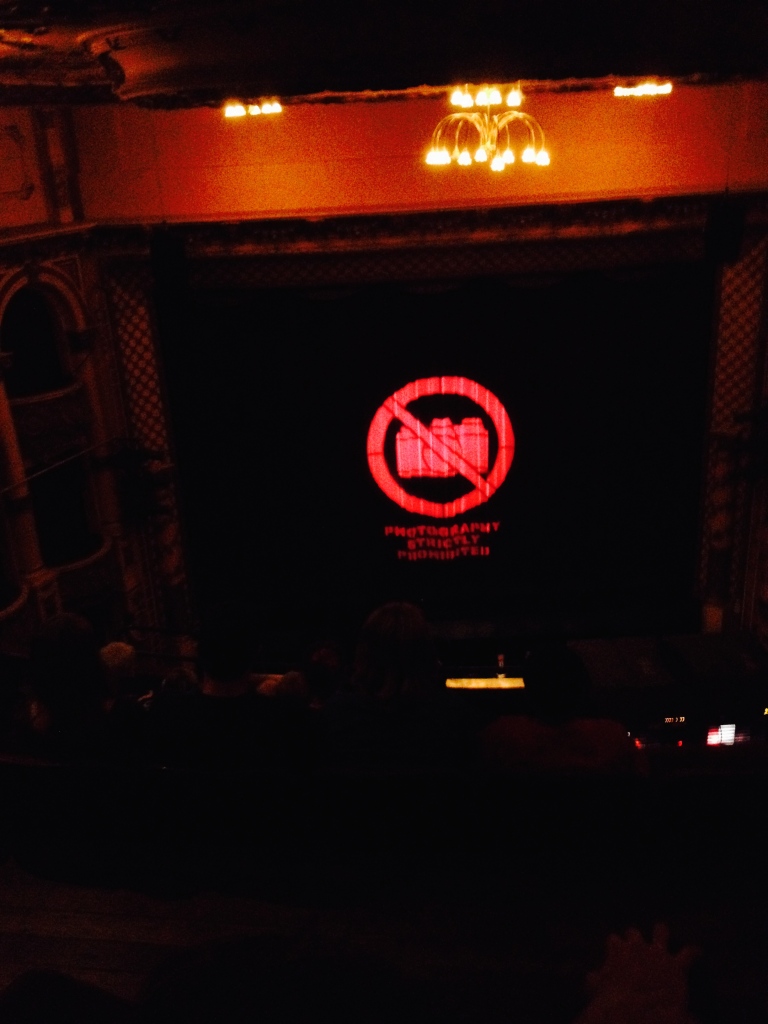 No photography. Managed to jot some notes as a record of what was happening, but the theatre was almost pitch black and there was just so much going on.

The two hosts, one American male in a tux and one Chinese female in a qipao, who would guide us through the evening’s performances, spoke with freakishly standardized English and Chinese accents and introduced each section with an emphasis on the words traditional, classical and authentic. The way the performance is promoted as a stunning spectacle of 5,000 years of Chinese culture in one night quickly falls away as the narratives of each segment reveal the (previously undisclosed) political messages of the sponsors: the Chinese Government is Bad, Falun Dafa is Good.

Any aesthetic appreciation I could have taken from this performance was almost immediately extinguished by the overwhelming propaganda of the movement, as well as the Westernisation and reductionism of Chinese culture to appeal to foreign audiences.

The performances wash over you; fluorescent highlighter, watermelon-coloured costumes, sickly pastel-coloured backdrops of a strange, Crash Bandicoot-styled utopia based loosely around regions in China, upbeat, orchestral music arranged like an Asian-themed level of a Playstation game. The hosts return and beam some more in between each act, the structure is meant to provide a vignette into various ‘traditions’ around China, moving quickly between eye-catching, synchronised dancing, anti-Government songs and representations of ancient Chinese history to embody Falun Dafa ideology (note: the religion only started in the 1990s).

In one act, a woman gave birth to a meatball and a boy popped out when the dad sliced it open. Everyone kept jumping into the screen and flying away on broomsticks and clouds, staging a Dragon Ball Z-style battle in the sky at the beach, before the enlightened Falun Dafa believer prevailed in slaying his opponent and flying back to the clouds with other monks on broomsticks to a large temple. It’s hard to explain. 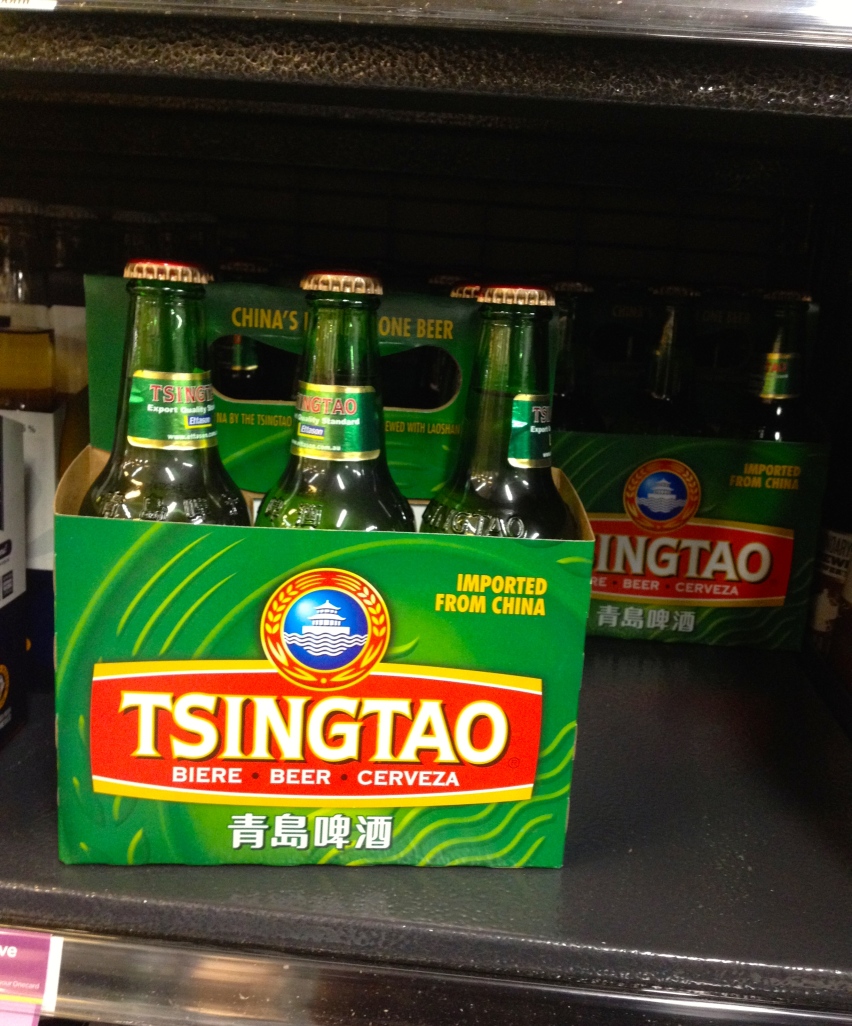 Drinks before the show. Possibly the most authentic aspect of Chinese culture that evening.

Another skit had a mother and daughter happily praying and holding a Falun Dafa sign with 法轮大法好 [Falun Dafa is Good] inscribed on a wall behind them. They are beaten, gang raped and discarded in a theatrical dance by male dancers dressed in black with the hammer and sickle embroidered on their backs. The daughter prays and is transported via cloud to a temple with dozens of monks, where she meets her mother in prayer. The curtain closes, the hosts beam back onto the stage, we are unsure whether to clap.

It is in this extreme display of propaganda that gives Shen Yun that uncomfortable duel effect; it makes you want to tell all your friends about it and has the ‘See It To Believe It!’ factor, but for all the wrong reasons.

One apparently ‘traditional’ song had a Chinese woman opera singing with a grand piano while not-so-subtle lyrics such as “Do Not Believe the Lies of the Red Demon,” and “Find the followers of Falun Dafa, it is your last hope” were screened behind her. Skits like ‘The Happy Go Lucky Farmers of the Yellow River’ and ‘Folk Dance of the Yao People’ that present gleeful scenes of pastoral life were dispersed like sweeteners between the more directly subversive songs and presentations, where even the Han were treated to the ethnic romanticisation so often reserved for minority cultures.

There were so many different sections, storytelling anecdotes and ‘facts’ from the hosts that it became difficult to ascertain what the actual fuck was going on. Which I think was the desired effect. Let the fabric slip over your eyes… Yes, the coordination of the dancing was extremely precise. Yes, the costumes were pretty. This is how propaganda works, people.

The indoctrination process was at its peak when the audience was asked to chant “I love Shen Yun” together in Mandarin. “Are you saying love is ai and ‘woe’ (actually wo) is me?” beamed the American host, whose extreme accent was grating on the Kiwi audience like ten Ryan Seacrests all at once.

Mercifully, there was a fifteen-minute interval. Some people rushed to the bar or smoking area, some people walked out completely, while others were intercepted by Falun Dafa media for an interview about the show.

Okay this is INTENSE
SHENYUN

I felt uneasy at how the show had been designed for a Western audience’s understanding of Asian culture. The whole thing seemed Chinese themed in its arbitrary inclusion of recognisably Asian imagery, which to me made it seem more like a cartoon or a Pokémon village. Orange robed figures as monks. Dragons. Temples. Reductive symbols of Asia that lead oblivious Western audiences to believe they are experiencing something Asian. It was kind of like China on Broadway. Forms of ballet-style dancing, Western orchestral instrumentation, Chinese language gags and so on. There was no trace of the high pitched warbles of Peking Opera I’d seen in Beijing, or the southern opera variants from my Por Por’s well-loved cassette tapes. No theatrical slapstick acting and dialogue. No deafening clangs of beating gongs. No Shaolin swordplay, acrobats, aerial stunts or martial arts.

Pre-show Snapchat. Looks like Rosa was expecting acrobats too.

The performance is not harbouring a hidden message; the message is literally printed on flags in the hands of the performers. While there had been an exodus from the Upper Gallery during the intermission, the remaining audience members were treated to a turbo-charged, more urgent version of the first half.

The real jaw dropping moment for us was yet to come. We had come to the end of the journey through 5,000 years of truly bizarre shit, and the hosts introduced the final dance as one from the present day. Was it the scenes from the White House, the Eiffel Tower and the Sydney Opera House, or the apocalypse that destroyed Shanghai and had a monk emerge from the rubble on a giant, golden gong, or the bordering on subliminal “THE FUTURE NOW BEGINS” message that flashed up on screen before the curtain close that took the cake? I’m not sure.

The performances and hosts work to present a genuine and authentic image of Chinese history, this act of reshaping and re-presenting a nation’s history is one that sees Shen Yun directly align Falun Dafa’s beliefs with a sense of historical legitimacy. My criticism here is not of religious freedom, but of the masquerading of religious and political messages through the manipulation of Chinese cultural capital. The truthfulness that is so strongly espoused as a Central Tenet of Falun Gong is ironic when the whole show was based on a thinly veiled deception. It is a basic human right for people to be able to practice their beliefs without fear of persecution, but disguising a religious agenda as a night of cultural entertainment is disingenuous and does not do any favours for the integrity of the movement.