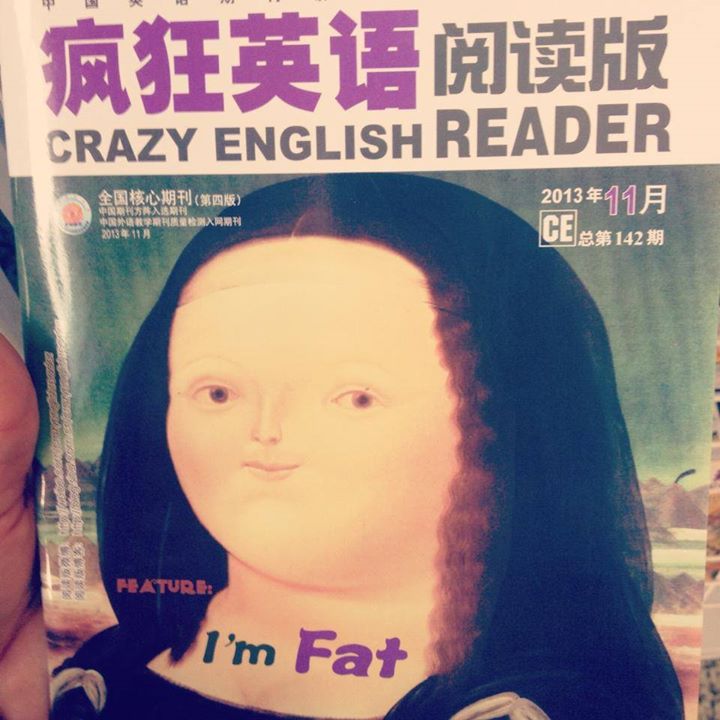 Got munchies? Aucklanders (奥克兰人 Àokèlán rén) Carb on Carb completed an epic eleven date tour of the Middle Kingdom back in November with good buddies God Bows to Math. Kiwese followed them from Beijing to Suzhou and recently we reminisced about their first foray into Asia and how Chinese cabbage and eggplant dishes are exponentially more delicious than in New Zealand. 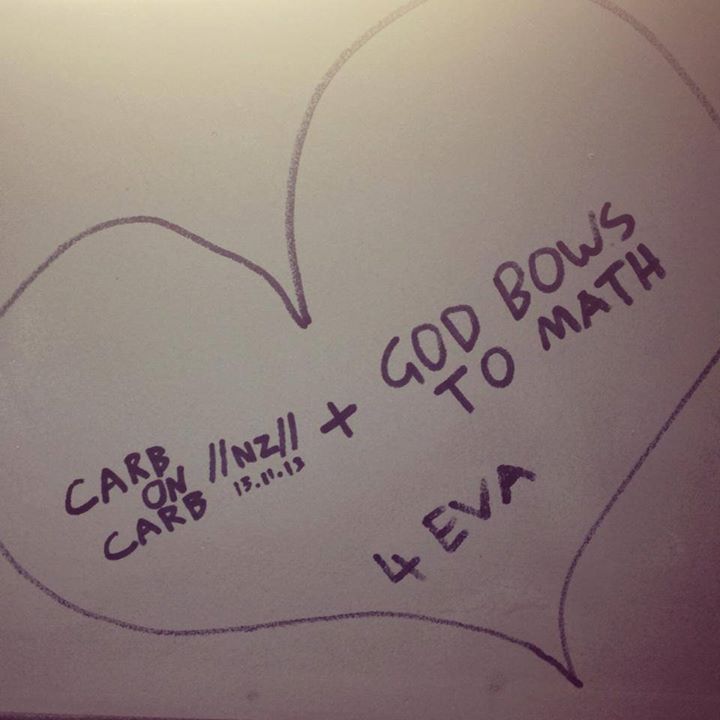 I first met the duo behind Carb on Carb, epic diva (天后, tiānhòu, lit. ‘Heavenly Queen’) Nicole Gaffney and handsome guy (帅哥, shuài gē) James Stuteley in the grungy merch area at MAO Livehouse in Gulou, Beijing. I quickly scrawled the phonetic pronunciation of “da jar how” [大家好, Hello everyone!] on Nicole’s hand before they took the stage for the first show of the tour when it struck me: these guys, fresh outta the Auckland underground, are here playing their music around China. That’s gotta mean something. It is awesome.

Carb on Carb are the kind of people you wanna be mates with. Their outlook is fresh, fun and friendly, they are really nice, keen to chat and down for whatev. Their music is like Crunchy Peanut Butter machine-gun fire that makes you wanna thrash about like a voodoo doll, yet its stripped back in a way equally suited to lying on your bed with headphones, dreaming about your crush.

Self described as post-punk/noise pop/pop-gaze, Carb on Carb do most of their shit themselves, from the recording, mastering, poster design, album art and photos. They embody a genuine DIY spirit, not in a Mitre 10 Dream Home sense, but in a similarly inspiring way that shows what can be done if you put your mind to it, work hard and do it for the luv of it. From seeing them sell their CDs for a criminally low price, to the “All content is free for you to enjoy and distribute as you please” message on the Papaiti Records website, it is clear these guys are playing music just cos they wanna play music. Word.

After we drunk a bottle of báijiǔ chased with beers, I made the executive decision to follow the bands to Zibo, a small town out in the wops of Shandong. Waking up on a friend’s couch the following morning with no information about Zibo (ie. where da fk da venue??), I decided to push ahead and catch them down in the river town of Suzhou instead, known as the ‘Venice of China.’ Despite the small, sedentary nature of the audience at Wave (New Zea-land hip hop / stand the fuck up!), Carbs were well-received, scored some free booze and made some choice mates after the show, which is the point after all right?

You can/should download and emo out to Carb on Carb’s EPs no body perfect (2012), Ladies Mile (2013) and their single Eden Terrors, which was released just before coming to China. All their songs are free to take but koha where you can aye! Also the new video for Eden Terrors features some exxxclusive China footage and is the best thing on YouTube right now. 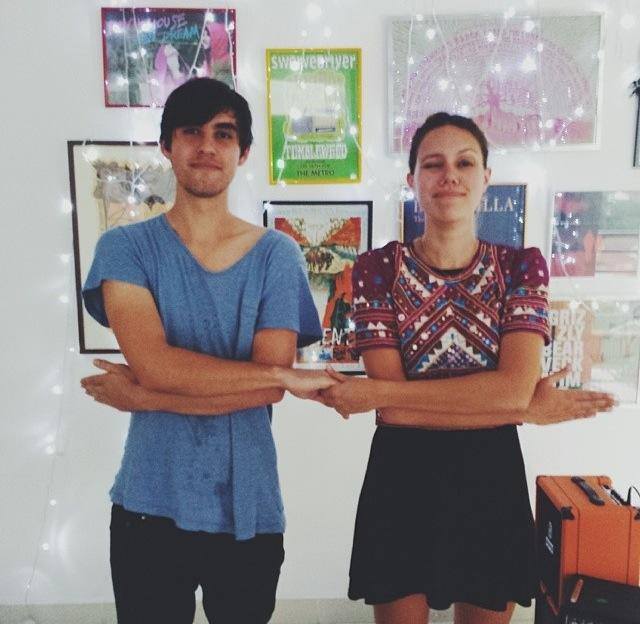 James and Nicole aka Carb on Carb

Hey guys! You’ve just spent quite a lot of time in China and South-East Asia, any weird reverse culture shock back in Nu Zilland?

J: It was strange to not have such overloaded senses all the time, no bike bells and horns, people and noise. To come back and feel like your senses are deprived cos its not loud and it doesn’t smell [laughs]

N: After being in Asia for so long we’d gotten used to not understanding the language around us. I found myself getting really annoyed when I heard the way people were talking about others, like “hey don’t be so mean!”

How did you guys get involved in the China tour? GBTM says they had a connection with Pairs.

N: During the Pairs tour of NZ, Rhys talked about China as a really achievable kind of goal after doing Australia. We thought that instead of doing America or Europe we may as well do China, because it’s closer, cheaper, we can get by with contacts and play to a hungrier audience.

J: I guess also once Die! Die! Die! and So So Modern had done it, the idea became more realistic.

So how was it? Did you have any expectations going into it?

N: Having the time to go sightseeing was incredible, but obviously I loved the shows too.

J: I had some sort of expectation but actually being in China made me realize how little we know about it. Coming from a Western culture and not knowing much about the history of the hugest country in the world, then seeing all these crazy castle complex things like the Forbidden City which have immense histories, but we just think of them as sights. I studied the Manchurian invasion in high school but that was it. I really didn’t know about the Nanjing Massacre. 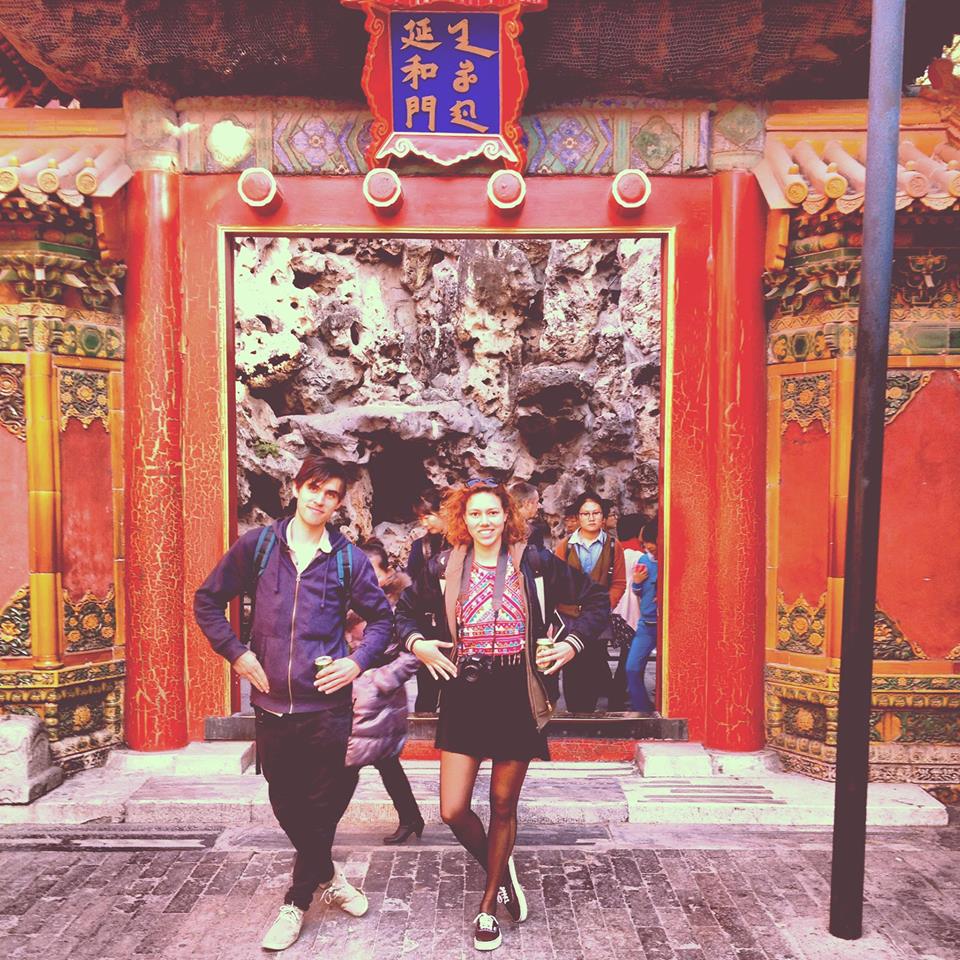 Is there a community of local NZ bands that are looking towards China?

J: I don’t really think there’s a ‘community,’ but there’s certainly bands interested in doing it.

N: It seems like mostly Wellington bands have done it in the past, as well as Die! Die! Die! from Dunedin. But for a small band like us to tour China, we can talk to other bands in Auckland about our experiences and help them to see China as a doable thing. We are telling people they should do it! Why not!

The ~*Internet*~ seems to be an important tool for getting your material out there. How’s your online presence in China?

J: We made a Weibo page which Nicole has recently updated. We also got Rhys and Tom [This Town Touring] to make us a Douban because working out the Chinese was just way too confusing. Thankfully Bandcamp isn’t blocked in China.

N: We have a Youku as well! We tried to research a bit about it just to put our stuff out there. Even if it was in terrible translated Chinese, at least people would get the general idea: that we were a band and we were coming. 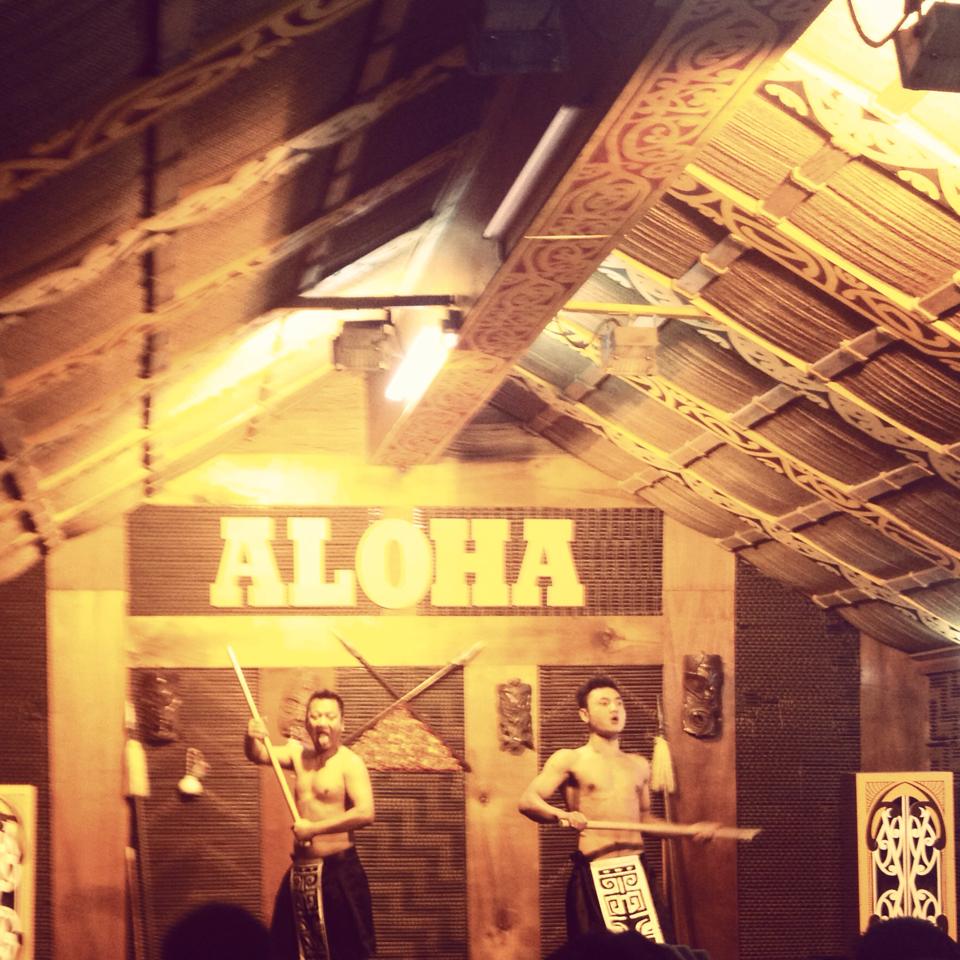 I know I’ve said it before but I love the tour poster! Got a signed copy from all you guys from the Beijing show.

N: Thanks! I drew it when I was at work [laughs]. My boss was pretty excited though, she’s from China. 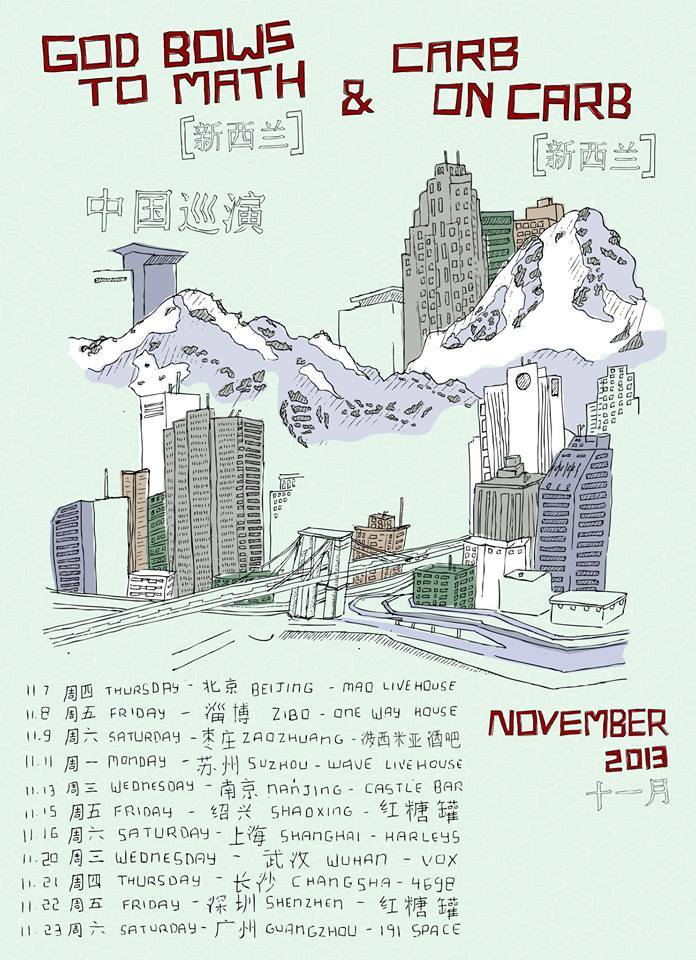 The tour poster. Art by Nicole.

I saw some pretty impressive use of dramatic hand gesturing and sign language from you guys in China. How did you find the language barrier?

N: The language was really hard. But having our tour manager Vivian with us made it a lot easier. I wish we learned a bit more, it would have been really cool to communicate with the people who liked us at shows, even just to be able to thank them properly and understand what they have to say. I used the ‘Da Jar How’ at every show!

J: It was interesting to experience what its like to not be able to speak the dominant language, it helped us understand how other people might feel. In New Zealand we just expect everyone to speak English. Very educational to be on the outside.

How was it coming from the NZ scene where you are quite familiar with the crowds to China where no one knows you?

J: It was pretty bizarre being presented as ‘Kiwi Rock Night’ in Suzhou.

N: That’s what I love about touring, just getting to meet new people and not playing to the same crowds over and over again. So it was really exciting to see fresh faces and have people react freshly to our music when they haven’t even heard it before. 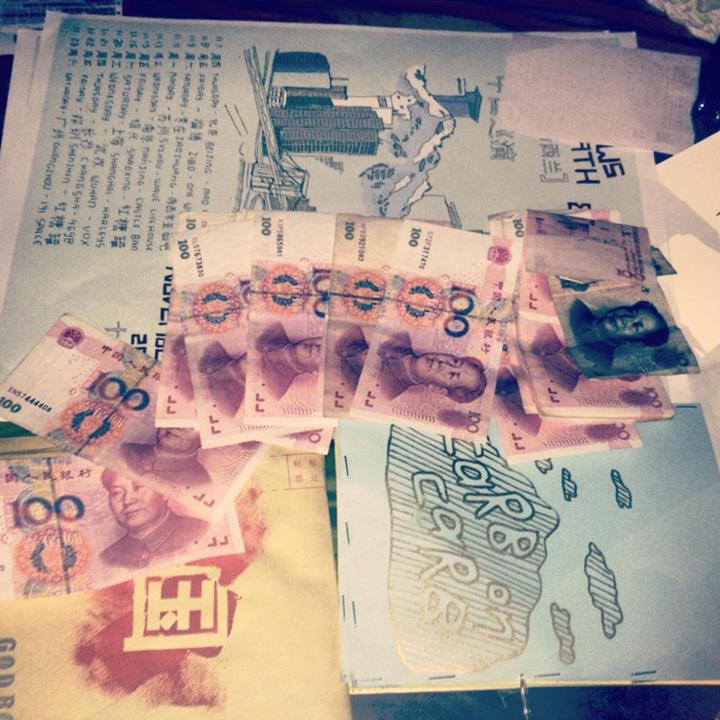 So you guys hit up some pretty niche places, tiny towns in Shandong that no ones ever heard of. What’s the scene like down there?

J: At the show in Zaozhuang there was a big group of about fifteen friends and they were real keen to talk to us – they’d try out their English with a few words, then we’d say a few words, and all of were just cracking up. These guys were crowdsurfing and moshing with no one else in the bar. The people were really cool, they just had less barriers. They would spend more time talking with us and taking photos with us, generally way more excited to see some bands.

N: Yeah, they kept buying us loads of beers, being almost forceful with it! Hanging with them was really fun and different from other crowds we’ve met. The bar owner in Zaozhuang also took us out for an amazingly delicious dinner before the show and shouted us the meal! He even drove us to the train station in the morning! People at all of the shows were so generous – it was pretty overwhelming. 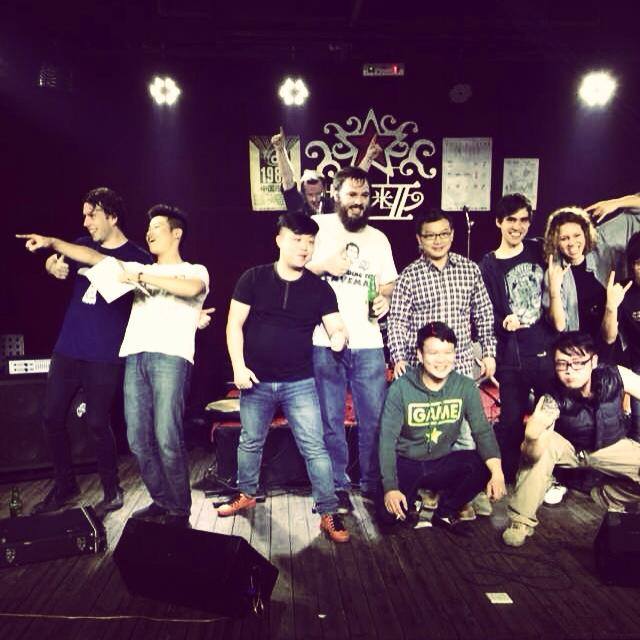 Stage antics with the fans in Zaozhuang

Were they actually into your music?

N: We were selling our EPs for 20RMB and they literally bought all our merch! The people we met were having a good time and having the experience of meeting us and talking to us. The same was with Randy who gave us the wine in Suzhou! He was just as keen to meet us as we were to have free wine [laughs] 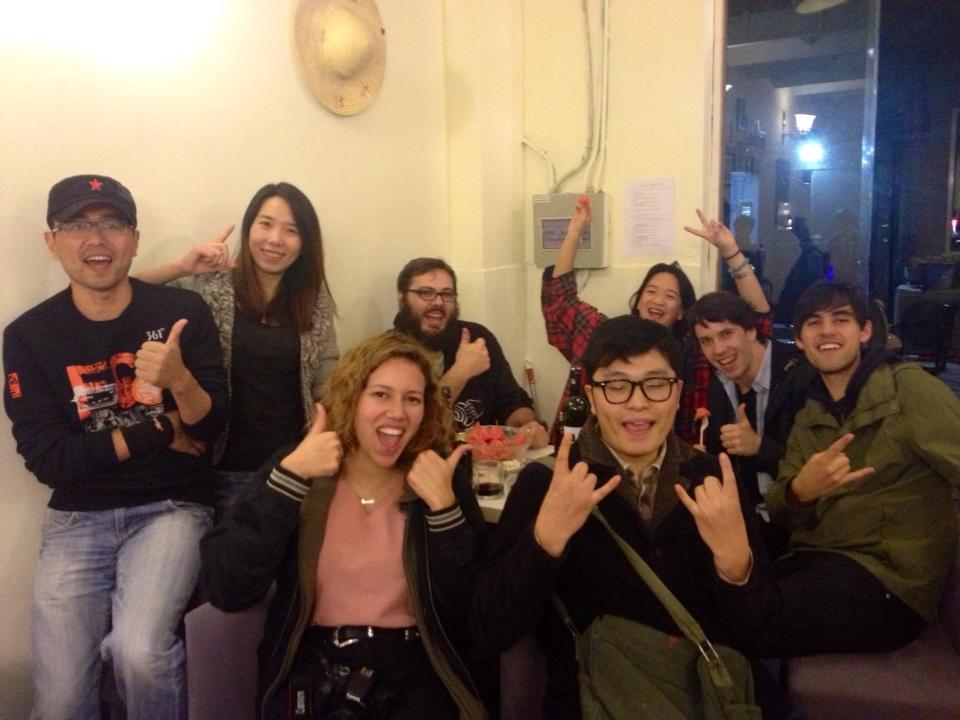 As far as touring and performing goes, did you guys have any issues?

N: At our first show in Beijing I found the indoor smoking quite intense from a singing perspective. Before coming to China, we pretty much knew there were gonna be loads of bikes on the roads, but with the smoking in bars I wasn’t quite prepared!

J: It was quite hard not playing with support bands at every show, though we did play with a few locals like Illness Sickness. Next time we would definitely try have a local band play at every show. 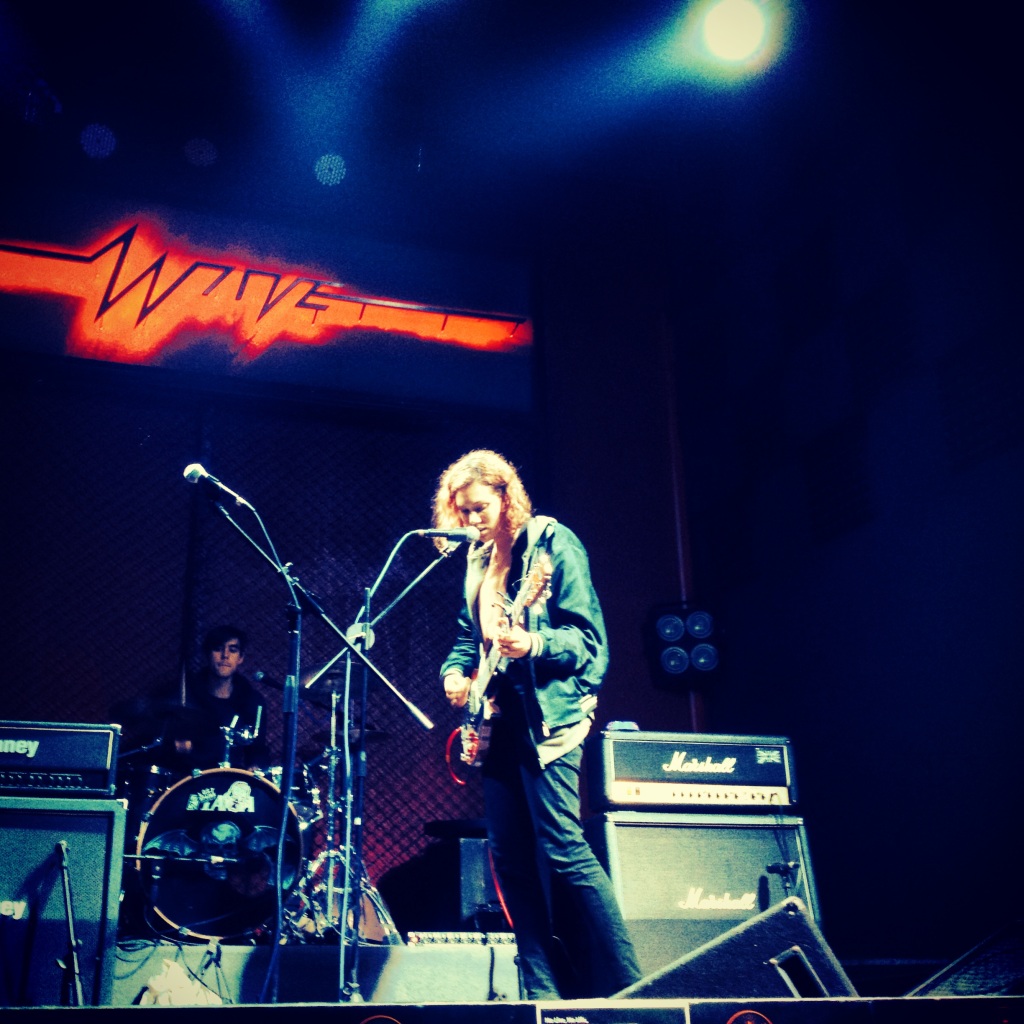 Any little things in China you found yourselves appreciating?

J: It was really cool to be able to take food and drinks anywhere, I was surprised how much I enjoyed that, in NZ if you walk in to a place you cant take your food in. Hot water was available everywhere too… we just used it to make noodles and drink tea.

Cheesy question – what kind of advice would you provide to other NZ bands hoping to come to China.

J: Talking to you probably [all laugh].

Next time? Is there a next time in China on the cards?

N: We definitely wanna come back. I know God Bows are planning another tour for 2015!

J: I’d like to visit Xinjiang, the Tiger Leaping Gorge and the Three Gorges Dam. It would be great if bands started coming to New Zealand as well, it’s only an extra hop more. If anyone asks to play in NZ just tell them to email me: carboncarbband@gmail.com

You’ve just gotten back from a mean beach holiday up north, but what’s the plan for Carb on Carb this year?

N: We’re hoping to put an album out in the next year or so and just wanna keep touring where ever we can.

J: We’re doing a tour around New Zealand with Bare Grillz from Australia in a few weeks, just around the time of Camp. 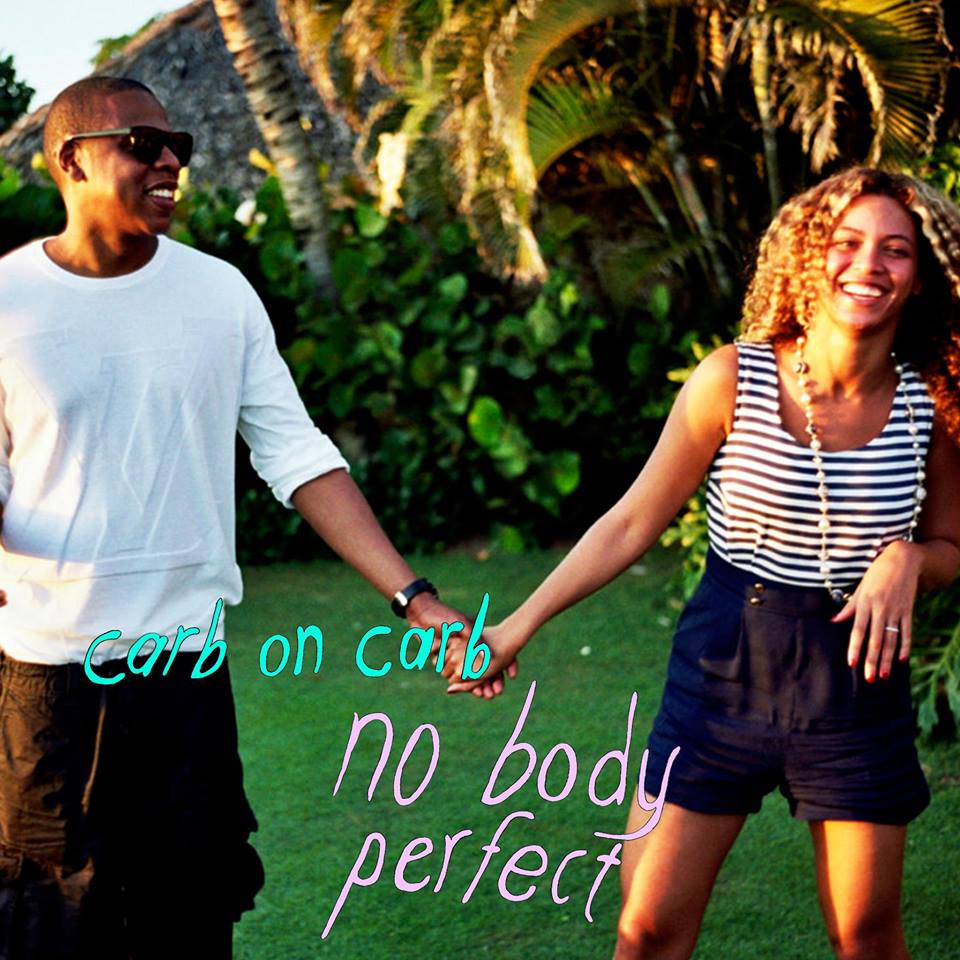 What do you think of Beyonce’s new album?

N: It’s so good, I cried when I listened to it.

Now check out the interview with Martin from God Bows to Math.